MyPBX U300 boasts an embedded PRI (E1/T1/J1) port with up to 30 lines, 2 FXS ports, 300 users, and 50 concurrent calls in the one compact system, providing higher density trunking for offices using E1 PRI signaling. It could be used as a gateway to legacy PBX systems in applications. 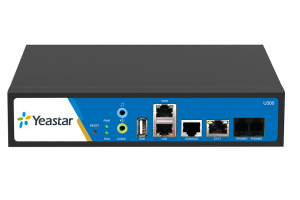 We not only care about your telephone system but also care about energy saving. MyPBX uses less power compared with legacy systems and IP-PBX running on rack servers. With less power consumed, it also minimizes the power expense and makes your office green.